In late September there was a major train accident in northern New Jersey that thrust trains into the national headlines. However, train accidents are not just incidents isolated to major cities, but happen all over the country. The Amtrak accident in Hoboken New Jersey resulted in the death of one individual but also injured over one hundred other people.

This blog post will explore some of the major reasons for train accidents as well as highlight a train accident that happened right here in Northwest Arkansas. 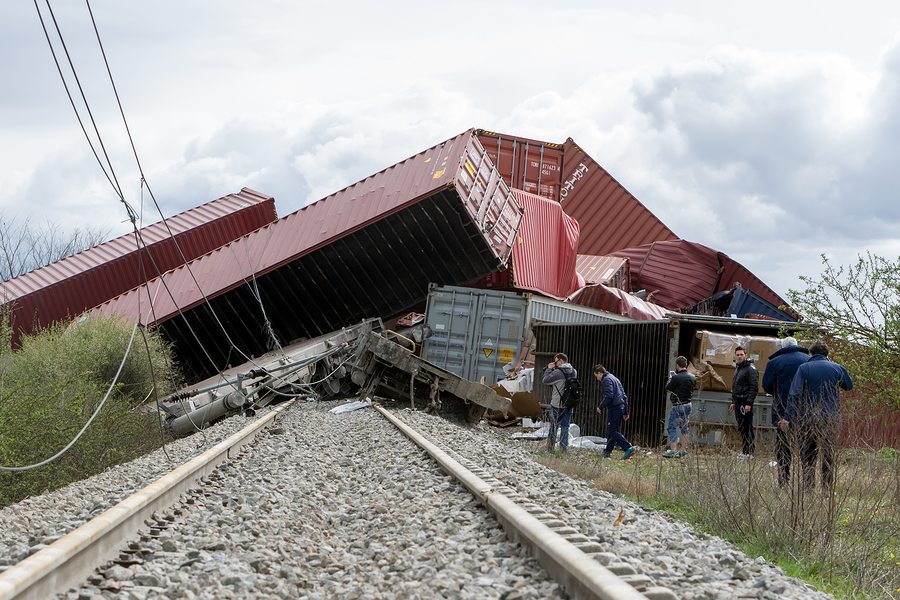 Statistically, trains are some of the safest modes of transportation, partially because there are fewer major disasters on trains than compared to the number car accidents and motorcycle crashes annually. However, this is not to suggest that train accidents, injuries, and even deaths do not happen. All across the country there are reports of train accidents, however, there is no uniform reason behind these accidents. The Federal Railroad Administration (FRA) tracks the causes of train crashes in the United States, and through many years’ worth of data, they have identified some common causes behind train accident and can potentially provide insight as to why train accidents happen.

The FRA divides train crash causes into six broad categories and anytime there is an accident involving a train, they will attempt to place the accident into one of these categories:

Human Error – From January to July of 2016, 322 accidents or almost thirty-four percent of all train accidents were attributed to some human error (33.5%). While the possibilities of circumstances that could be deemed human error are endless, the most common human error was an improper alignment of railroad switches according to the FRA. This type of mistake was responsible for 39 crashes: more than 4% of the accidents during the reporting the year-long period. Other human errors that led to avoidable accidents included:

Track Defects – 268 accidents were attributed to some defect in the tracks (27.9%). Types of track problems that caused railroad crashes during the reporting period included: broken welds, broken or malfunctioning switches, cracks or breaks around bolt holes, damage to tracks from rain or other conditions, worn down rails

Miscellaneous Causes – 144 accidents between from January to July of 2016 or
15% of all accidents could not be attributed to any one singular source, therefore fell under the umbrella category of miscellaneous.

Faulty Equipment – 128 train accidents were caused by faulty equipment in a one-year span.

Train-Vehicle Collisions – 80 train accidents involved a collision with a train and some vehicle.

Signal Errors – 18 train accidents over the course of a year were caused by signal errors.

Train Accidents are Not Limited to Urban Areas

While it may seem that train accidents are uncommon in rural areas or only happen in major metropolitan areas, to the contrary, train accidents can happen anywhere. The following incidents are examples of accidents that have happened not only in major cities across the country, but also right here in Arkansas.

February 24, 2015, one person was killed and twenty-nine others were injured when a train in California derailed.

On May 6, 2016, the Benton County police department reported that a woman was killed and another was critically injured and flown to the local hospital as a result of a train collision. While it is not certain why the accident happened at the time, and crews will be recreating the accident, preliminary reports show that the train was traveling under 70 miles an hour at the time of the accident, which is still a high rate of speed considering the mass behind a train.

On April 3, 2016, two people were killed when an Amtrak train derailed in Chester, Pennsylvania.

On August 31, 2016 a train and semi-truck were involved in an accident. The accident occurred on Highway 62 in Corning Arkansas when a semi-truck carrying a large piece of machinery became lodged on the track. However, before the truck could be moved a local train came and hit the truck. Several people were transported to the local hospital as a result of the accident, however, there were no serious injuries.

Unfortunately, it is not always immediately apparent why a train accident occurred. In the case of the accident in Chester County Pennsylvania, it appeared that there was construction equipment on the track which leads to the accident. Still, other accidents are caused by a train collides with a vehicle, such as the accidents in California, Clay, and Benton. These accidents are a few examples of the ways that preventable railroad accident can occur.

Were You Injured in an Amtrak or Arkansas & Missouri Train Accident? Contact a Fayetteville Personal Injury Attorney

Fayetteville AR personal injury lawyer Ken Kieklak is here to help. If you were injured in a train accident in Northwest Arkansas or throughout the state, you may be entitled to compensation to recover for your medical bills and other expenses. Depending on the circumstances of your case, railway companies may be held liable for personal injuries and wrongful deaths from collisions, derailments, and any other type of train accident. To speak confidentially with a Arkansas catastrophic injury lawyer who can evaluate your case, contact the Law Practice of Ken Kieklak online, or call us today at (479) 316-0438. We listen to our clients and don’t get paid until you do.